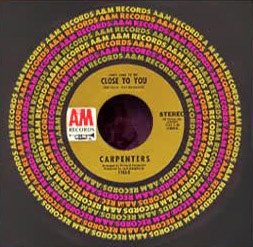 A mono promo single exists containing the single edit. It was only issued to radio stations.

Single edit, stereo reversed: same as above with a reversal of the stereo channels
– O MELHOR DE CARPENTERS – ONLY YESTERDAY
– A ARTE DE CARPENTERS

Chris May says:
Regarding the SACD surround mix: Piano is somewhat reverberated for the first time, with some delay. Also, a very notable change is heard at about 0:33. The harpsichord is mixed in throughout the second verse which is not heard on any other mix. A very “fresh” change. Backing vocals have incredible separation.

This is one of Richard’s arranging secrets: he loves certain players, and he’ll write parts just the way he imagins they would play them. For the flugelhorn solo in Close To You,for example, Richard tried to imagine how Herb Alpert would play a part written by Burt Bacharach. When it came time to do the session, though, Alpert wasn’t available so they brought in Chuck Findley. But Richard had written out the way Herb would naturally bend notes at the end of phrases [see score in bars 38-40]. “Chuck didn’t play it that way at first, but I worked with him and he nailed it. A lot of people thought it was Herb – Bacharach thought so, too. But it’s the way Findley is playing it.”

“Arranging the ending of that tune was a problem for me,” Richard continues. “I hate fade-outs and try to avoid them. Now we had the background vocals doing the wah-ah-ah-ah-ah part and then what should come next? Well, again, I thought, ‘how would Bacharach do this?’ He often had these kind of trick endings, like at the end of Raindrops Keep Fallin’ On My Head, [sings ending of Raindrops]. Completely new music. Why is it there? Well, why shouldn’t it be there?! It makes it! It’s a neat part, in fact, the best part of the record. And obviously, that’s why we ended the song with the wahs – they’re an important part of that record. Then in rehearsal, Karen came up with the idea to push [syncopate] the third one, and that is great.”

*The “middle-length edit” was done especially for the original ANTHOLOGY LP’s in 1985, first appearing on CD when ANTHOLOGY was released in 1989.  Richard used the long album version but cut it just past where the single would have faded. His piano part is doubled with the final note holding, to allow a segue to “Ave Maria”.  It’s unique to the original ANTHOLOGY set and not done in the (97) version.