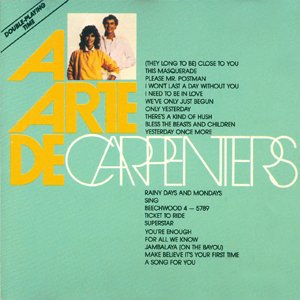 The Brazilian licensee for A&M product in Brazil (PolyGram) released a series of albums called “A ARTE DE…” (The Art Of…) and Carpenters had a 2-LP set in the series. In 1987-88, the two-record set was combined onto one CD, and it has some surprises. Since this came before the big 1990-91 remixing sessions, there are a number of 1985 remixes and original mixes here.

As is somewhat “normal” for discs from South America, there are a number of tracks with reversed stereo here, much like that other Brazilian comp, O MELHOR DE CARPENTERS – ONLY YESTERDAY. Still, here there are a few with the proper stereo orientation.

A song that has never been anthologized anywhere else, “You’re Enough”, shows up here, and it’s a mighty welcome addition. As this is a mid-80s disc, it was mastered well before the loudness wars, and in comparison to some later discs, this one requires a boost on your volume control – but it’s worth it – the sound is pretty darn good here, with crisp highs and a solid bass.

For completists, it’s worth seeking out, if you can find one!