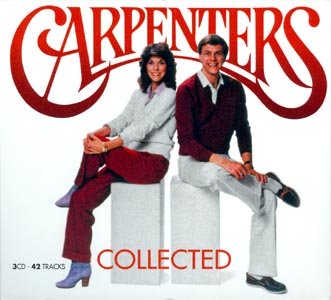 CARPENTERS COLLECTED, issued in 2013, is essentially a reissue of the 2006 set called ULTIMATE COLLECTION. Both sets originate from Universal Netherlands, but the earlier one was withdrawn quickly after its initial issue.

The thrust of this set is that the recordings are all from the Remastered Classics series of albums, thus none are remixed; all are original album versions and are in something close to chronological order. There are two discs of Carpenters material, virtually all singles (even “Goofus”!), and a short third disc containing a few solo tracks.

Packaging on the COLLECTED set is again a quad-fold digipak, with different pictures, but the text of the liner notes remains identical to the ULTIMATE COLLECTION.

In 2017, Music On Vinyl licensed this album and released an abbreviated version on a two-record LP set.