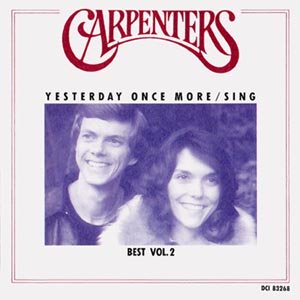 The second volume in the Japanese mail-order-only series called CARPENTERS BEST. This VOL.2 again features 18 tracks, most with their newest remixes. Many are the typical hit songs found on compilations. This one features, in the way of different choices, “Sandy”, the expanded and remixed “Let Me Be The One” from FROM THE TOP, “Reason To Believe”, and “I Just Fall In Love Again.” Those songs have not anthologized as often as some of the main hits.”

Not that easy to find, the set of discs all feature genuine A&M Records logos (through PolyGram K.K.) and genuine Jasrac logos. The inserts are sparse with just a track listing in English and Japanese, and inside is a foldout sheet with English lyrics.

Both volumes were also combined into one double-CD release called CARPENTERS BEST, SONGS SELECTED BY RICHARD CARPENTER (DCI-83267/8) and had a limited general release also in 1994.