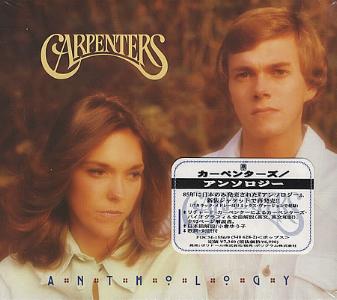 ANTHOLOGY had been released in Japan on a limited edition LP set in 1985 and more widely on CD in 1989 and, at the time, was the foremost compilation of Carpenters material attempted. It was a massive four-disc set containing all the hits, favored album tracks, and even the entire oldies medley album side. It was the first time the world was treated to Carpenters’ version of “Honolulu City Lights” and marked the first release of the live Bacharach/David Medley.

It went out of print and became a highly sought-after item, so eight years later in 1997, Richard and A&M Japan re-released it, with the new cover, pictured above, and a boatload of new and different remixes that had evolved with the passage of time. As a result, some of the liner notes, that were not updated, refer to things that aren’t in evidence on this version of the set. An example would be with “Goodbye To Love.” Richard’s notes go into great detail about the opening breath, his count-in being audible through Karen’s headphone leakage, when in fact none of that is present on the track in the ’97 ANTHOLOGY. (You can hear that on FROM THE TOP though, or the older ANTHOLOGY if you’re looking for it.)

Other changes added the “Casa Rosada” intro to “Don’t Cry For Me Argentina” as a separate track, removed a number of segues, and combined the full side two of NOW AND THEN (“Yesterday Once More”, the Oldies Medley, and the reprise) all into one track. On the prior ANTHOLOGY, the reprise was separated out as its own track.