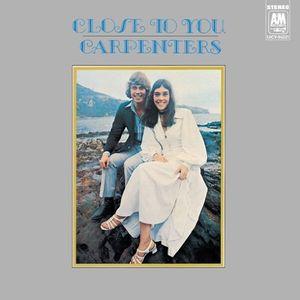 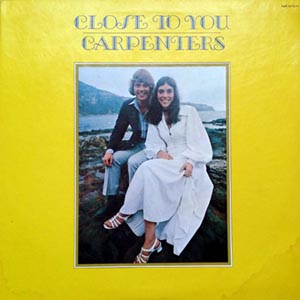 “We’ve Only Just Begun”:
– Originally written for a commercial for the Crocker Citizens Bank, sung by songwriter Paul Williams.

– Released in August of 1970, “We’ve Only Just Begun” made it it to #2 on the Top-100 on Billboard within (8) weeks.
– The classic “Carpenters vocal sound” was well established by this time, using a standard overdubbing process created by Richard. The first two parts (the outer 2-parts of the chord) were tracked by each Carpenter simultaneously, followed by two more additional overdubs per part, creating a “tripled” vocal effect (6 voices in total initially). The chord was then completed by employing the same process for the two ‘inner’ parts of the chord. The end result was 4-part, 12-voice harmony, all created by Richard and Karen. A couple of examples would be the classic “Waaaahs” on “(They Long To Be) Close To You”, and “…We’ve only begun…” heard after the first verse in “We’ve Only Just Begun”. This style of 4-part harmony, close harmony would be heard on many of their recordings, dubbing it the classic “Carpenters’ sound”.

– The original piano, bass and drum tracks would eventually be re-recorded by Richard Carpenter alongside studio drummer Hal Blaine and bassist Joe Osborn for remix in 1985.

“(They Long To Be) Close To You”:
– “(They Long To Be) Close To You” was recorded three different times, with the original piano part recorded by ‘Wrecking Crew’ sessionist Larry Knechtel, Joe Osborn on bass, and Karen on drums. Richard didn’t feel they had the arrangement quite where it needed to be, so by the third time, Richard was on piano, studio sessionist Hal Blaine on drums and of course Joe on bass. Because Richard and Hal had a tendency to rush the tempo a bit, Hal suggested that they use a “click track”, which was basically an electronic signal or “click” that accompanied the musicians, allowing them to follow a tempo map. Recorded at 88.5 beats-per-minute, the final ‘track’ for “(They Long To Be) Close To You)” was recorded, noting a total of 47 takes!

– Prior to the release of the “Close To You” album, the single “(They Long To Be) Close To You” was released in May of 1970 and made it to #1 on Billboard’s Top-100 within a month, where it remained for four weeks, initially selling two million copies.

“Mr. Guder”:
-“Mr. Guder” was written by Richard Carpenter and lyricist John Bettis out of spite for a man they worked for in their earlier days at Disneyland, by the name of Vic Guder. As the story goes, the young Carpenters and Bettis were all fired by Mr. Guder for their long hair, refusing to comply with company policy.

The recording of the “Close To You” album:
As any die-hard Carpenters fan knows by now, the recording of a Carpenters album was no easy task. It often times took anywhere from 3-4 months to complete, start to finish. Each individual Carpenters song, involved first the recording of what Richard often refers to as the “track”. This always involved the simultaneous recording of the drums, bass, piano, and often times a ‘work’ lead or scratch vocal as it is often times referred to, by Karen (which would later be replaced by a final “master” lead vocal once some of or all of the orchestration was added – Note: Karen always preferred to hear the strings present in her mix before completing her final lead vocals).

This would lay the initial foundation for each song so that backing vocals, orchestra (strings, horns, woodwinds etc), and Karen’s master lead vocal could be added, then mixed. In order to maximize budgets, it was not uncommon to record two or more song “tracks” per session, often beginning as late as 8pm, running sometimes into the wee hours of the next morning. This meant drummer and Wrecking Crew founder Hal Blaine who often acted as contractor for the rhythm section in the early days, pulling together musicians like bassis Joe Osborn and guitarist Louie Shelton (who was never credited) to come to A&M to lay down the foundation to many of the tracks, adding Richard Carpenter to the fold on piano. The same held true of the overdubbing process (which simply means adding additional tracks to an existing one) with the orchestra. This process often times involved Jack Daugherty in the very early days, who contracted with people such as Jules Chaikin, to fully secure the orchestra players, all of whom (including Richard and the immediate Carpenters band) were members of the Local 47, the established musicians union in Los Angeles. Richard would eventually assume this role as he became more familiar with the process, into and following the recording of the “Close To You” album. Below is an example of what this looked like, including dates/times of various sessions, and the song titles connected with them:

CLOSE TO YOU, the second Carpenters album, really launched the duo to stardom, and quickly. Its title track, “(They Long To Be) Close To You” had been a relatively unknown song in the Bacharach canon, and at Herb Alpert’s suggestion, Richard tackled the arrangement to give it that Carpenters’ sound. The result was a stunning and instant success, zooming up the charts, straight to #1. The second single “We’ve Only Just Begun” went nearly as big, and both songs became signature songs for Karen and Richard over the years.

The album has more emphasis on Karen’s lead vocal than their first effort, though arguably, Richard’s lead on “I Kept On Loving You” is among his best.

An Australian LP release of the title came with a yellow-colored border instead of the common silver/gray (pictured above, courtesy of member “itovs.”) 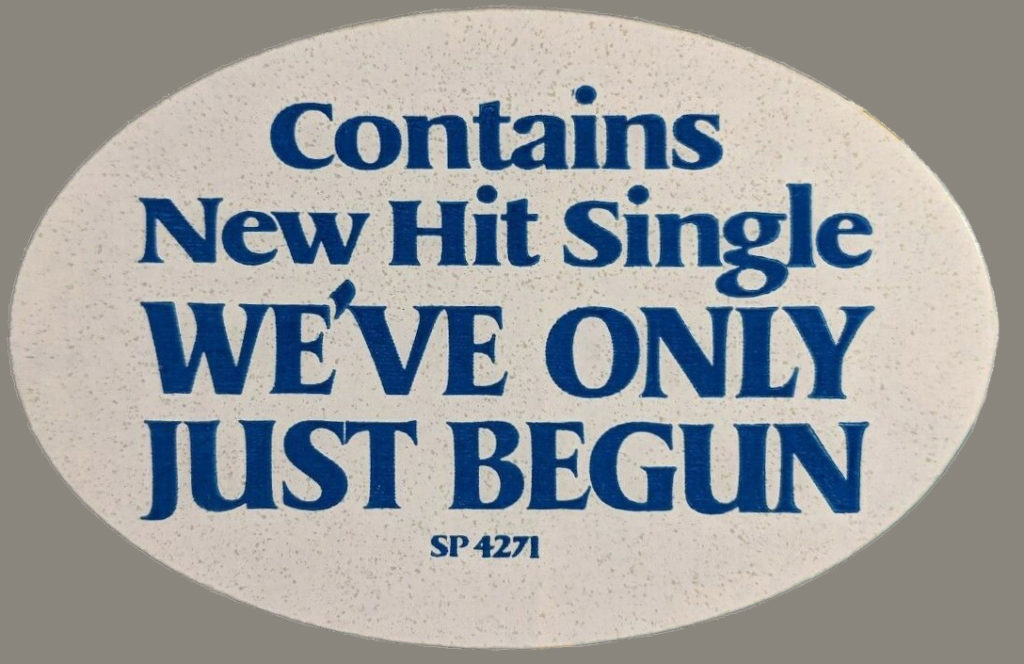 Original promotional ad for this album, which also promoted the new single of “We’ve Only Just Begun”: 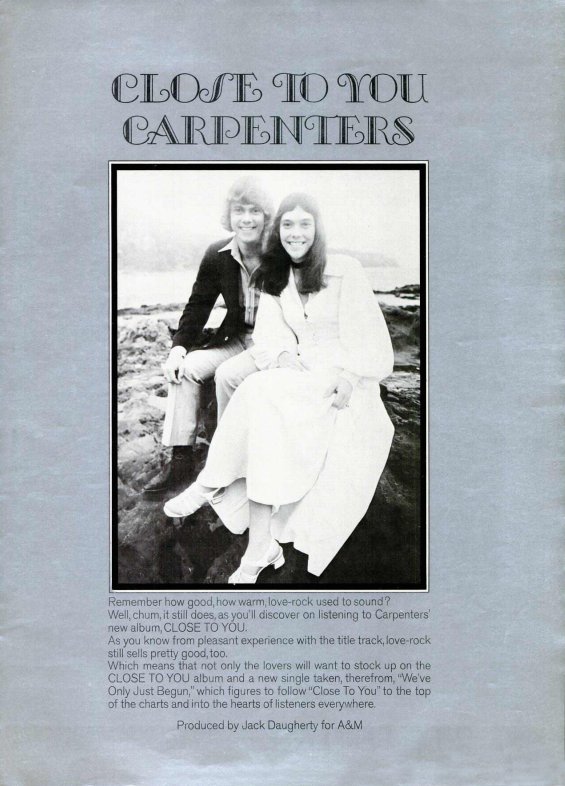