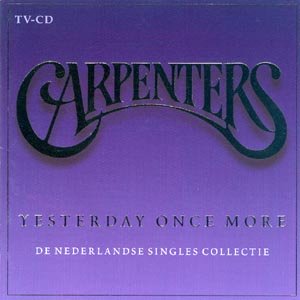 Back around the turn of the millennium, it was heady times for Carpenters fans. The Remastered Classics albums had just been released, rumors were flying about an “Evergreen” compilation that turned into BY REQUEST, a new issue of unreleased songs (AS TIME GOES BY) was just around the bend, and a good one-disc compilation was topping the charts in Great Britain (GOLD). Japan got in on the action with their boxsets and their own release of GOLD, which culled a couple of tracks from that new AS TIME GOES BY set.

The US version of GOLD would wait a couple of more years – and be two discs to boot – but yet another version of the album appeared in the Netherlands in 2001. It wasn’t titled GOLD, but instead took the oft-used YESTERDAY ONCE MORE label. It’s full title was YESTERDAY ONCE MORE – DE NEDERLANDSE SINGLES COLLECTIE. With the Dutch subtitle in prominence, it wasn’t too commonly imported around the world, so is now one of the less commonly seen efforts. This version was also part of one of those “as seen on TV” campaigns in the Netherlands and bears a TV-CD indicator on the upper left of the cover art.

Though an official compilation, it didn’t use the A&M logo on the package at all – instead using the Universal TV logo. And instead of the gold on black color scheme of GOLD, it used silver on purple, making it a rather striking variation. Of the 20 tracks on GOLD, 19 were used on the Dutch compilation, with a slight change in the track listing which inserted “Sweet, Sweet Smile” in as track 6, pushing everything else down one, eliminating “Calling Occupants Of Interplanetary Craft”, and flip-flopping “Only Yesterday” to be the last track. All of the mixes that were common are identical with a good portion being mostly updated 1991 remixes.