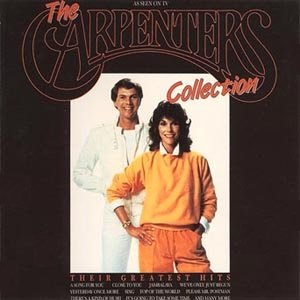 There’s one thing about officially-released Carpenters CDs that you can usually count on, and that is that they universally sound great. Meticulous care in mastering is almost always the case. Not here though.

This disc, made in West Germany by PDO, and licensed from A&M Polydor Holland, is perhaps the messiest Carpenters compilation out there, and thankfully it’s not too plentiful. The label associated with the release is “Star Records”, but it has the official licensing from A&M Records info on the inserts.

As it was made in “West” Germany, it had to have been before the official reunification of Germany in 1989-1990, so with no official date to go on, and the mixes used, it’s probably from around 1988 or 89.

Audio quality: where to begin? Virtually every track is mastered pretty low in volume. That’s not a bad thing, but these are really low. You’ve got to crank up your volume a lot to hear these at a normal level. And when you do, you’ll hear that they all sound a bit muddy, lacking the crisp highs usually found on virtually all other official CDs.

There are speed issues here too. The best example is “We’ve Only Just Begun”, a track found on virtually every compilation. Well, here it’s sped up just a tiny bit. You wouldn’t notice it playing it on its own unless you’ve got perfect pitch, but played relative to another version of the same song, and it becomes obvious that the track is slightly higher-pitched. Other tracks here also have this slightly sped-up issue.

Sources for mastering: This too is questionable. A number of tracks here have residual “leftovers” from previous segues on other discs. For example, “Because We Are In Love” has a residual chord at the start leftover from its segue with “Top Of The World” on CLASSICS VOL. 2. Likewise, “Touch Me When We’re Dancing” has the remnants of its segue with “For All We Know” from that same CLASSICS VOL. 2 set. And “Ticket To Ride” still has its remnants of its segue with the wind-chimes that end “(Want You) Back In My Life Again” on CLASSICS VOL. 2, making it fairly obvious that the compilers of this disc utilized that older set to master this one.

Finally, mention must be made of the inclusion of “Our Day Will Come” from the Oldies Medley. Tony Peluso’s DJ is here, chopped in the beginning and chopped at the end, making for a rude listening experience indeed.

If faced with a choice of buying this or another Carpenters compilation, pick the other. If this is the only Carpenters music you own, go find another. It’s that bad.