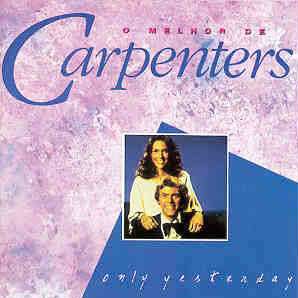 This Brazil-only compilation from 1989 has some interesting things about it and most of it is not good.

– First, volume: This CD is most certainly not “maximized” to sound loud the way many modern discs are. In fact, the recorded level of this disc is very low indeed, meaning you have to turn up your volume control to hear it. It’s lower than most CDs out there.

– Second, stereo: The stereo image on every track is backwards. For example, the opening piano part that Richard plays on the “Singles Overture” is typically found in the left channel. Here it’s in the right. And it’s that way throughout this entire disc. If you’re used to the strings swelling on the left, well, they’ll be on the right on this disc.

– Third, processing: There is something odd about the sound of this disc, even if you compensate for the reversed stereo and the low volume. I hear it in the bass notes. They sound indistinct or somehow muffled, almost as if they were out of phase or had some kind of odd processing applied. This effect is most noticeable with headphone listening and applies to the entire disc.

– Fourth, edits: This disc has a unique combining of the “Singles Overture” with “Only Yesterday”. But there are a few other odd and unpleasant surprises with some songs that seem to start or end improperly. “(Want You) Back In My Life Again” isn’t too bad, with its wind chimes fading a bit early. This track’s chimes are typically segued with whatever’s next, but they’re faded just a tad early here. “All You Get From Love Is A Love Song” is missing an opening beat or two in the percussion. The song just starts abruptly a little later than it’s supposed to. It fades early too, as the original version of this recording has a very long fade-out. This one just gets it over with earlier by shortening the fade. “Rainy Days And Mondays” has an odd opening too, with a very quick fade-in that’s different from other discs. It’s very subtle and you have to listen very closely to hear the difference.

There’s one other odd thing about the back cover – there’s a mysterious eight-digit number following every track in the list.

Anyway, overall, this disc is an anomaly. It’s official, it’s got some interesting things about it, but it also doesn’t sound all that great. It’s fun for completists, though.

One should also note that there’s another, similarly-titled disc out there called SO O MELHOR DE CARPENTERS that’s not the same at all.  That other one is a cheap gray-area knock-off of HORIZON, one of many.