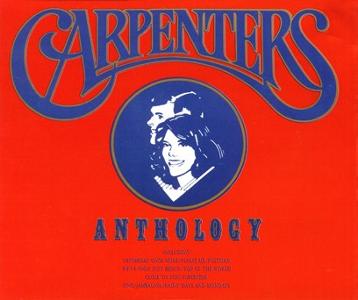 The first massive four-disc set of Carpenters’ best came in the form of ANTHOLOGY in Japan in 1985 as a limited edition, numbered, vinyl LP set. It was more popularly released on CD four years later, and has come to be known as the ANTHOLOGY (89) set. The set provided not only a comprehensive selection of hits and favored album tracks, but added two, at-the-time unreleased gems. This marked the first release of “Honolulu City Lights” and the live “Bacharach/David Medley”. Those two would later show up on LOVELINES in the US in ’89 and the Reader’s Digest set in ’97 repectively.

Many songs here are lightly segued with each other, giving the listener a seamless listening experience. Because of this several tracks were sped-up or slowed down slightly to make their musical keys match up better. Most notably, “Don’t Cry For Me Argentina” was slowed to make it segue from the prior track, “I Need To Be In Love”, but the slow-down ends up making Karen’s vocal sound whiny.

ANTHOLOGY included a lengthy bio written by Richard Carpenter along with his own notes for every track in the set, giving brief histories and sometimes notes on the recording process and remixes.

Due to popular demand, ANTHOLOGY was re-released in 1997 in a very different form. The track list was nearly identical, but the versions of songs used were changed, many times updating to the latest remixes.