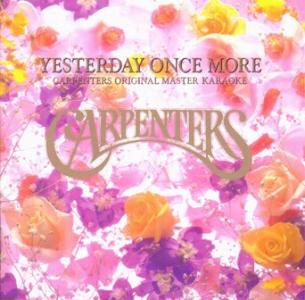 The Karaoke project was an important one in the Carpenters remix canon. To combat off-label attempts at making karaoke versions of Carpenters songs, Richard decided to do it officially and to do it right. He went back into the studio with the master tapes, remixed fifteen top songs, and then made special mixes without Karen’s lead vocal. The result is that the karaoke singer can have the full production and even overdubbed vocals while performing his or her own lead vocal.

The set was released several times, always in Japan. First came a two disc set called BEST OF BEST+ where disc one contained the newly remixed fifteen songs with normal vocals. The second disc contained the karaoke mixes of those same songs. The cover is very much like the one pictured above, with “BEST OF BEST+” in place of “YESTERDAY ONCE MORE”.

It went quickly out of print and with fan pressure was re-released in 1994, this time with just the single disc with the karaoke mixes, with the new title as pictured above, with the often-used YESTERDAY ONCE MORE tagline in the title.

It appeared one more time in 2005 in Japan, once again as a second disc of a two-disc set, this time as part of the 10th anniversary of the TWENTY-TWO HITS album. In addition, one more track was added to the karaoke disc, “Sing”, which had been prepared for inclusion on a “Top Of The World” CD single in 2003. “Sing” was inserted as the fifth track, pushing the others down one place.