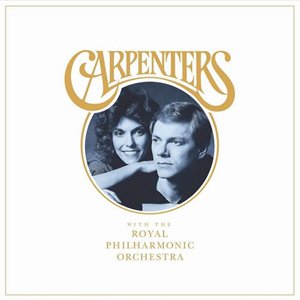 This is a 2018 release that saw Richard Carpenter back in the swing at arranging, conducting, and producing a new concept Carpenters album. In conjunction with the Royal Philharmonic Orchestra recorded at Abbey Road Studios in London, Richard conducted new orchestral accompaniment that was melded with the existing Carpenters repertoire in new and exciting ways. The album was constructed in Richard’s trademark seamless way with songs flowing in and out of orchestral overtures, interludes, or links, as Richard has termed them.

Due to manufacturing deadlines, early releases on CD contained several not-quite-finished mixes. These included the end of the Overture, the piano intro on “Yesterday Once More”, the piano intro on “Ticket To Ride”, and the end of the intro to “We’ve Only Just Begun”. When these early versions were compared with downloadable versions, it was clear that the download versions were fuller, more fleshed out.

It is presumed at the time of this writing, that future LP versions will not have this issue and that all tunes pressed on vinyl will be the final, finished versions. It is also presumed that should the album need subsequent pressings on CD, that they too will have the fully completed embellishments.

In the US, Target stores offered a CD with a bonus track of “Please Mr. Postman”. The same bonus track could be had on the Japanese SHM-CD.

In the lead-up to the release of the vinyl version of the album nearly a year later, Richard continued to tweak some sections of the audio for the album, and various online sources released these updates on an as-released basis. At present it is believed that the vinyl version contains the final edits to the album, along with the various online sources. Any further CD pressings (should they be made) would also likely contain the final versions.