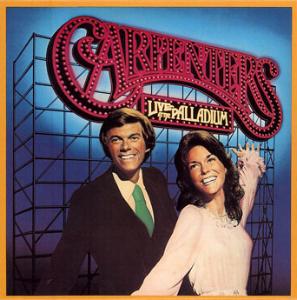 1. Flat Baroque/Only Yesterday
2. There’s a Kind of Hush
3. Jambalaya (On the Bayou)
4. Piano Picker
5. Strike Up the Band/S’Wonderful/Fascinatin’ Rhythm
6. Warsaw Concerto
7. From This Moment On
8. Medley:
a. (They Long to Be) Close to You
b. For All We Know
c. Top of the World
d. Ticket to Ride
e. Only Yesterday
f. I Won’t Last a Day Without You
g. Hurting Each Other
h. Superstar
i. Rainy Days and Mondays
j. Goodbye to Love
9. We’ve Only Just Begun

Part of their 1976 concert tour, this recording of their appearances at the Palladium in London was released on LP to the UK. As with the Japan concert, no release was given to the United States. This concert is different from the previous one, as the show had been completely revamped by Ken & Mitzi Welch. Much of the first part of the show dealt with a musical story-telling of the history of the Carpenters duo, featuring selections with Richard at the piano and Karen on drums and vocals, with the pair trading stories of how they came to the world of pop music.

Richard is featured on the pop “Piano Picker” and the classical “Warsaw Concerto,” while Karen is showcased playing drums on “Strike Up The Band,” “S’Wonderful,” and “Fascinatin’ Rhythm.” The duo then perform a Ken & Mitzi Welch treatment of “From This Moment On” with Karen singing the melody to Richard’s playing of an altered Bach Prelude. The second half of this concert album features a 19-minute long hits medley. The touring group appearing here are: Bob Messenger on bass, keyboards, tenor sax, flute and backing vocals; Cubby O’Brien on drums; Doug Strawn on keyboards, clarinet, and backing vocals; Tony Peluso on guitar, keyboards, and bass; and Dan Woodhams on bass and backing vocals. The orchestra was conducted by Dick Palombi with Doug Strawn conducting the “Warsaw Concerto.” The album seems short in comparison to the Japan concert album – indeed it’s at least 20 minutes shorter as much of the between-song banter has been trimmed here. This album has been issued on CD throughout the world (except the US) several times, one of the more recent being a Pickwick release (PWKS 572) complete with new liner notes. 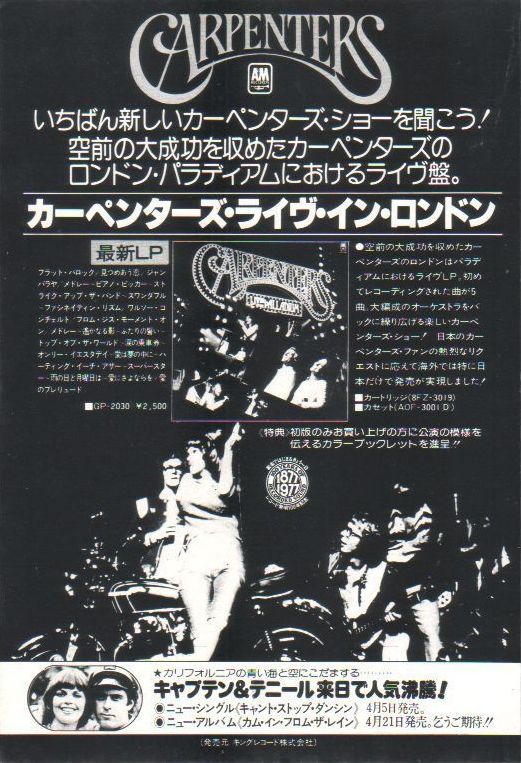