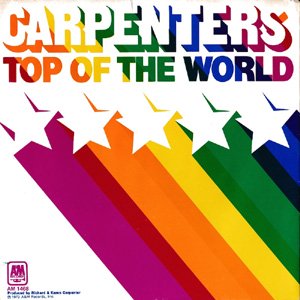 Original single mix: Known as the 1973 version, this version is what Richard came up with when they finally released the song as a single after it had chart success in Japan and elsewhere. It’s a fairly common mix found on many compilations, and was used on A&M’s first CD release of A SONG FOR YOU (CD 3511) instead of the album mix. It also appears on these CDs:
– A SONG FOR YOU original A&M CD
– A SONG FOR YOU (MFSL disc) and the COMPACT DISC COLLECTION version
– 20/20 BEST OF BEST SELECTION
– 40/40 BEST SELECTION (JP)
– 40/40 (US)
– A&M COMPOSERS SERIES VOL 2 (RICHARD CARPENTER-JOHN BETTIS)
– A&M NEW GOLD SERIES VOL 1 (1990)
– A&M GOLD SERIES (1991) and STARTRAX (AUS)
– ANTHOLOGY (89)
– THE CARPENTERS COLLECTION (THEIR GREATEST HITS)
– CARPENTERS-THE COMPLETE SINGLES
– GOLD (UK)
– GOLD (JP)
– ICON
– JAPANESE SINGLE BOX
– ONLY YESTERDAY-THEIR GREATEST HITS
– REMINISCING
– THE SINGLES 1969-1973 (all versions)
– YESTERDAY ONCE MORE (UK)
– YESTERDAY ONCE MORE (NL)

On this stereo single mix, the final two pedal-steel guitar notes can be heard on the right channel. This is also the version used on the video program known as YESTERDAY ONCE MORE, ONLY YESTERDAY, and GOLD, though on GOLD the stereo is reversed.

A variation of this single mix can be found on the mono promo single mix where two different-sounding pedal-steel guitar notes appear at the end, so one could argue that it’s yet another mix. But it’s unique to the 45 mono single found on promo copies.

Single version – 1991 remix: Remixed in 1991, “Top Of The World” now featured a heavier bass and drum, and the final two pedal-steel guitar notes were mixed to the center (both channels). This mix is modeled on the single mix, and can be found on:

This emanates from the 1991 remix version’s backing tracks.

SACD stereo and 5.1 surround remix: Remixed again in 2004 for the SACD release of SINGLES 1969-1981, “Top Of The World” got two new mixes for that album, one in 5.1 surround sound and one used on both the SACD stereo and CA-Audio layers. The stereo version sounds again different from the other versions, with a wider stereo sound stage overall. This stereo mix also appeared on the ULTIMATE COLLECTION (UK) in 2006.

Chris May says:
Regarding the SACD surround mix: The two major differences here are the kick drum, which has been EQ’ed like the original mixe(s), unlike the remix from 1991. Also, the slide guitar throughout is more distinct. Karen’s lead is very clear and present.

An original promotional ad for this single: 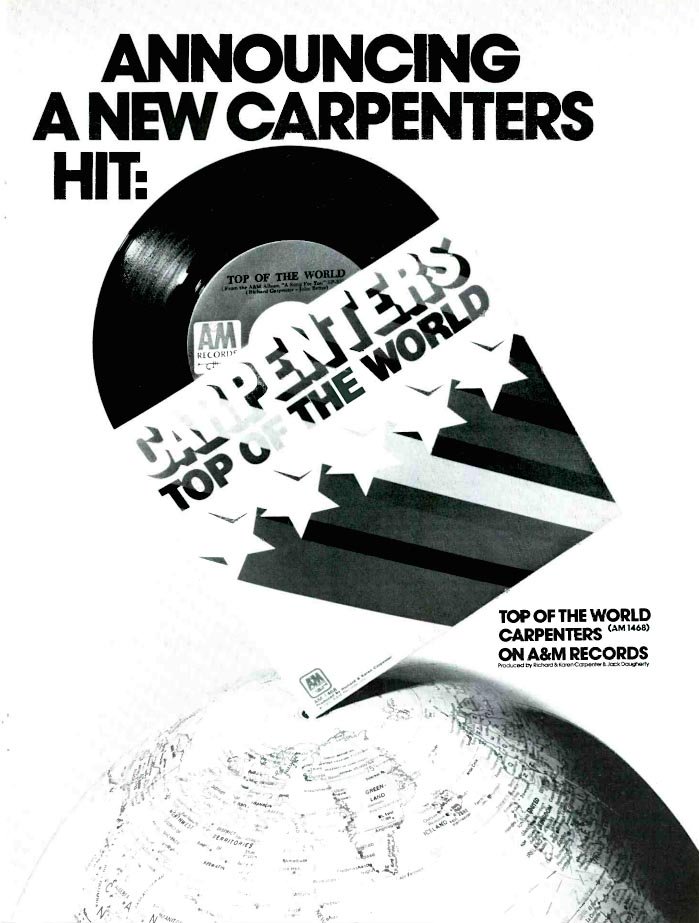