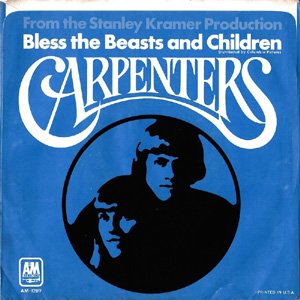 Original album mix: When originally recorded and placed on the A SONG FOR YOU LP, there was unavoidable noises in the background, like a squeaky studio door. These noises were later either filtered or remixed out.
– A SONG FOR YOU LP, and original A&M CD
– CARPENTERS COLLECTED
– CARPENTERS-THE COMPLETE SINGLES
– ULTIMATE COLLECTION (NL)

Original soundtrack mix: has vibraphone instead of English horn at open and close
– BLESS THE BEASTS AND CHILDREN soundtrack album
– JAPANESE SINGLE BOX

1985 remix: stereo piano added, bass and drums enhanced, track ends cold instead of fade-out, intake breaths audible on “the children” as the song ends (Thanks to “closetoyou10” for that latter info.) Squeaky door sounds filtered out.
– A SONG FOR YOU (MFSL) and the COMPACT DISC COLLECTION version
– A&M GOLD SERIES VOL 2
– A&M NEW GOLD SERIES VOL 2
– ANTHOLOGY (89)
– ANTHOLOGY (97)
– THE BEST OF CARPENTERS (Brazil)
– CARPENTERS BEST VOL. 2
– CLASSICS VOL 2 and YESTERDAY ONCE MORE (85)
– FROM THE TOP
– INTERPRETATIONS (UK)
– INTERPRETATIONS (US)
– MAGICAL MEMORIES OF THE CARPENTERS
– SWEET MEMORY by and by
– THEIR GREATEST HITS AND FINEST PERFORMANCES (Readers Digest)
– TREASURES (JP)
– TREASURES (UK)
– YESTERDAY ONCE MORE (98)

1985 remix: same as above with reversed stereo:
– A ARTE DE CARPENTERS

Chris May says:
Basically there are two things to listen for when separating the ’85 mix from the ’91 mix. The mix from ’85 has the oboe at the intro more ‘centered’. The overall instrumental placement (i.e. stereo pan etc) are almost identical between the two mixes, however the ’85 mix is a little more dull sounding in comparison. The mix from ’91is a bit ‘brighter’ on the piano, English horn panned slightly to right at intro, and there is better separation between the kick drum and bass, making the overall playback a bit ‘punchier’. The levels are also a little hotter on the rhythm section in this mix.

Regarding the SACD surround mix:
Although this one has the “stereo” piano recorded in ’85, the overall mix tends to sound a little more like the original. The Wurlitzer electric piano is brought up a bit, and the backing vocals at 1:48 (second chorus) are mixed very hot in the mix, unlike all previous recordings, where a subtle “blend” was heard, allowing the listener to hear nuances that we never knew were there. A great surround mix!