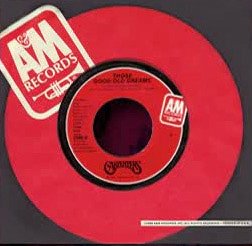 Original album mix:
– MADE IN AMERICA original LP
– YESTERDAY ONCE MORE (UK) on both LP and very rare CD

A mono folddown exists on the promo 45 single.

There are two different mixes of this song, both emanating from the same basic track. On the original MADE IN AMERICA LP, at around the 3:36 mark into “Those Good Old Dreams”, you’ll hear a high-pitch sustained “whine” from a synthesizer (after the final “…and it’s all because of you.”), leading to four more short descending notes on the synth as the track goes into its final instrumental mode to fade-out. This original album mix of the track also occurs on the British LP (and the extremely rare CD) of YESTERDAY ONCE MORE (CDS 26 0296 8).

This original album mix was also used for the backing to the video of ‘Those Good Old Dreams” found originally on the YESTERDAY ONCE MORE video program. That program was released on VHS tape and later on LaserDisc. It made it to an Asian VCD in 1990 under the revised title of ONLY YESTERDAY: RICHARD AND KAREN CARPENTER’S GREATEST HITS.

In 2002, the same video program was re-released as GOLD: GREATEST HITS in the US and appeared as a single DVD, combined with a 20th CENTURY CD, and as part of a deluxe Sound + Vision package. These US GOLD versions have reversed stereo from the original YESTERDAY ONCE MORE audio.

In 2009, for the 40th anniversary, Japan release a full set of albums and a newer DVD of GOLD with Richard’s commentary track. On this GOLD, the stereo is once again the correct way around. All of these video versions use the extended-intro, more-synth album mix.

Most all CDs of the “Those Good Old Dreams” use the single mix. This mix gets to a slightly different sounding synth “whine” at 3:36, and then the synth disappears for the rest of the track. This one was used on the original single, even the DBX version of MADE IN AMERICA, and every other CD out there.

Richard is known for disavowing some of the synth use of his younger day, hence the reason for the relative rarity of the “more synth” album mix.