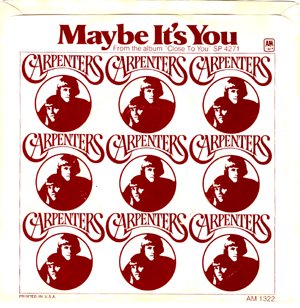 Original album mix: Regarding the “lucky penny line”, Richard wrote, “In 1970, we punched in and got ‘maybe it’s just that I have never been the kind who can pass a lucky penny by’, as we weren’t happy especially with that line on the master lead. The trouble was, it was recorded on a different day and the sound didn’t quite match even though the EQ, mic, studio, engineer – and singer – were the same.”
– CLOSE TO YOU and all CDs of this album
– CARPENTERS-THE COMPLETE SINGLES
– JAPANESE SINGLE BOX

1987 remix: replaced acoustic piano with the EP setting on a DX-7. This version continues to use the flown-in vocal for the “lucky penny” line.
– A&M COMPOSERS SERIES VOL 2 (RICHARD CARPENTER-JOHN BETTIS)
– TREASURES (JP)

1990 remix: returned to acoustic piano, and the line about “a lucky penny” is now the original lead vocal. Richard explained it:  When remixed the second time, we went back to the original.”
– 20/20 BEST OF BEST SELECTION
– 20th CENTURY MASTERS MILLENNIUM COLLECTION
– 40/40 BEST SELECTION (JP)
– 40/40 (US)
– CARPENTERS PERFORM CARPENTER
– ESSENTIAL COLLECTION
– GOLD (US)
– MAGICAL MEMORIES OF THE CARPENTERS
– SWEET MEMORY by and by
– THEIR GREATEST HITS AND FINEST PERFORMANCES (Readers Digest)

1990 remix with clean open:
– FROM THE TOP
– REFLECTIONS – SWEET SWEET SMILE – THE BEST OF THE CARPENTERS

I never posted his comment to me publicly, but here it is, straight from the mouth of the composer (John Bettis) himself:

“Okay….all the cards on the table. We wrote that in my mom’s living room…I still have the piano…really quickly..never considering Karen would sing it as a solo..we were still Spectrum at the time…so originally it was ‘ocean queen ‘ ..we switched it to ‘king’ for Karen. Love that song. One of my favorites.”

Mistakes were made all the time with published works (especially back in those days – referencing the music sheet above). So, there ya go