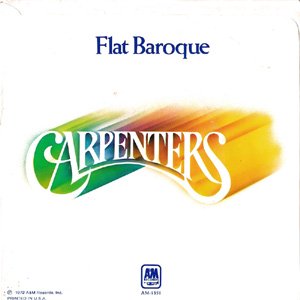 Sped-up album mix: very slight speed-up, but same mix
– A SONG FOR YOU original A&M CD
– A SONG FOR YOU (MFSL) and the COMPACT DISC COLLECTION version
– MAGICAL MEMORIES OF THE CARPENTERS
– TREASURES (JP)

Live version:
– LIVE AT THE PALLADIUM

Regarding the rarer single mix, Chris May says:

At 0:00, piano #1 in comes in with melody, panned predominantly to the left.

At 0:18, in comes piano #2 playing the upper octave panned predominantly right to mirror what’s happening melodically on the first piano, with a low-end embellishment and chordal fills toward the end. Note that piano #1 is carrying most of the “bottom”, carrying a majority of the chord changes throughout that section.

At 0:27, piano #2 (panned right) takes over the melody altogether on the pick up, and in comes piano #3 (placed ‘center’ in the mix) on the downbeat or “1” to create harmonics to support piano #2. In finishing out the phrase, all (3) pianos accent the ‘hits’ leading up to the solo.

At 0:43, piano #2 (right) begins to solo while piano #1 (left) carries the chord changes, followed by all (3) pianos creating the ‘hits’ toward the end, and repeating the same layout and progression throughout, with piano #3 (center) playing embellishments, etc.

When listening, think of it in terms of piano #1 (left), piano #2 (right), and piano #3 (center), and you’ll begin to piece together the puzzle.

All of this to say that this is an alternate mix from that which is heard on the album. It was not uncommon for Richard to also layer the acoustic piano as well on certain tracks. Ticket To Ride intro is a perfect example in the segue between bars 6 and 7. During the build up you’ll hear the piano is actually an overdub on top of the initial piano on the track.