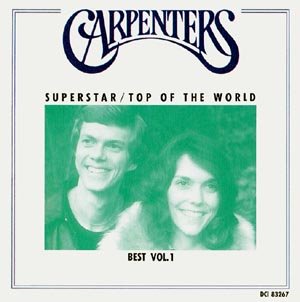 A 1994 mail-order-only set from Japan began with CARPENTERS BEST VOL.1, subtitled “Superstar/Top Of The World”. Paired with VOL.2, the 2-discs offer 36 tracks of largely the typical hit songs and favored album tracks. VOL.1 offers an oddly-placed “Sometimes”, the live version from LIVE IN JAPAN and not much else in the way of surprises. Most tracks that had been remixed appear here in their latest remix form.

These are official and were sanctioned by A&M Records, manufactured by Polygram K.K. Japan.

Both volumes were also combined into one double-CD release called CARPENTERS BEST, SONGS SELECTED BY RICHARD CARPENTER (DCI-83267/8) and had a limited general release also in 1994.