This article is by Marc Myers on the Jazzwax.com site:

Maybe it’s because I came of age in the early ’70s. Or because my parents had a “burnt orange” car. Or that I had an apple-green Schwinn Stingray. Or that our home was painted redwood. Whatever the reason, the Carpenters always take me back to a time when everything was changing, and not always for the better. But through it all—the striped bellbottoms, the tough kids in the suburbs and the gloomy news—Karen Carpenter’s voice made everything seem just right. 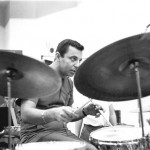 If you also have a soft spot for the Carpenters, you should know that the drummer on just about all of their hits was the Wrecking Crew’s Hal Blaine. What makes Hal’s playing behind Richard and Karen Carpenter so special is his subtlety and the percussive textures he added in just the right places. There’s the suspenseful delay of the drums on Close to You toward the end, just before Karen’s overdubbed vocal chorus comes in. Or his tom-toms on Rainy Days and Mondays.

I called Hal a short time ago to chat Carpenters because I had just discovered a series of YouTubes where someone isolated Karen’s voice on hit tracks, so it sounds like she’s singing a cappella. More on these clips at the bottom.

Here’s Hal Blaine, on the Carpenters…

JazzWax: When did you first meet Karen Carpenter? —Read the rest of the article at Jazzwax.com

Reprinted with permission by Marc Myers of JazzWax.com, winner of the 2012 Jazz Journalists Association’s “Blog of the Year” Award. His book, “Why Jazz Happened,” will be published in December 2012.